This semester at Syracuse, my classmates and I have learned all about emerging media platforms from Prof. Dan Pacheco. He’s covered so much, including drones, virtual reality, sensor journalism, augmented reality, 360 video, reality capture and 3D scanning.

For this last blog post, he’s asked us to imagine what the future holds for our career. Ten years from now, I hope to still be telling stories and teaching journalism at the University of Connecticut. Maybe I’ll be getting to interviews in a driverless car. I hope my favorite newspapers will still exist, but no doubt, we’ll be reading news on platforms no one has dreamed up yet.

As a health writer, I can see using sensors to tell stories as long as privacy is respected and the data is made available to journalists. I could see placing sensors in rivers across Connecticut that turn on when factories are emitting pollutants into the water. The sensors could detect the levels of the pollutants and transmit them to my computer, where I would check the data against state records to spot the violators.

We could do the same thing with air quality sensors or sensors to detect if temperatures are rising due to climate change. Or imagine if parents could have a handheld sensor to test the amount of lead in their water or in their child’s blood with a simple pinprick. What if they voluntarily sent the results to a news outlet, so journalists could report on whether lead poisoning is on the rise?

This semester, I was most struck by the immersive technology we learned about that gives viewers a “you are there” sense of a story. I think journalists will increasingly combine 360 video shot from a drone with live streaming. That would help readers understand a complex story or feel greater empathy for the story subjects. I’d love to see my students covering rallies or other events at UConn this way.

A great example of this came in North Dakota in 2016, when drone pilots captured law enforcement’s use of water cannons on activists protesting the Dakota Access Pipeline near the Standing Rock Sioux reservation. Some citizen journalists streamed the drone footage live on Facebook. See the screenshot below. To hear that water cannons were used on people is one thing, but to actually see them deployed from above, and live, was all the more compelling. 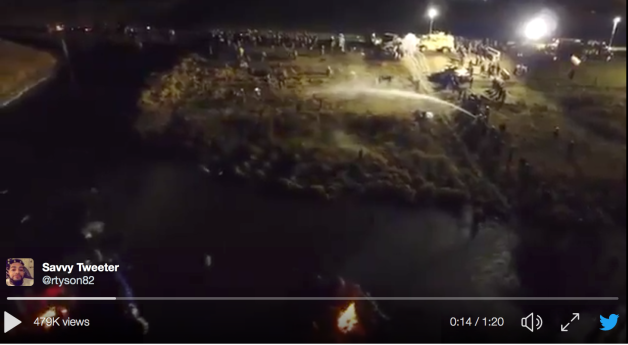 Wouldn’t it be cool to add 360 technology to footage like that? I think it would make the story more immersive and powerful. As it was, the footage went viral, and the Federal Aviation Administration quickly imposed a temporary flight restriction, banning drones and all civilian aircraft over Standing Rock.

I do worry about the FAA limiting journalists’ access to scenes like Standing Rock. We have to respect the law and not get in the way of law enforcement, but I believe drones should be allowed above scenes when news is happening.

Back to the future. To be honest, I’ve struggled a bit with the technology this semester, including when we were building chatbots and 3D scenes in the Unity gaming software. But I remain excited about the new ways I could be telling stories ten years from now. I might even get to a news story while flying one of those jetpacks we were all promised.

I have been a journalist in Connecticut for more than 30 years. I spent 23 of those years as a reporter and editor at the Hartford Courant, America's oldest continuously published newspaper. These days, I teach newswriting at my alma mater, the University of Connecticut, write for the Connecticut Health Investigative Team (C-HIT.org) and study communications at Syracuse University. View all posts by KATE FARRISH

This is a text widget, which allows you to add text or HTML to your sidebar. You can use them to display text, links, images, HTML, or a combination of these. Edit them in the Widget section of the Customizer.

This is a text widget, which allows you to add text or HTML to your sidebar. You can use them to display text, links, images, HTML, or a combination of these. Edit them in the Widget section of the Customizer.